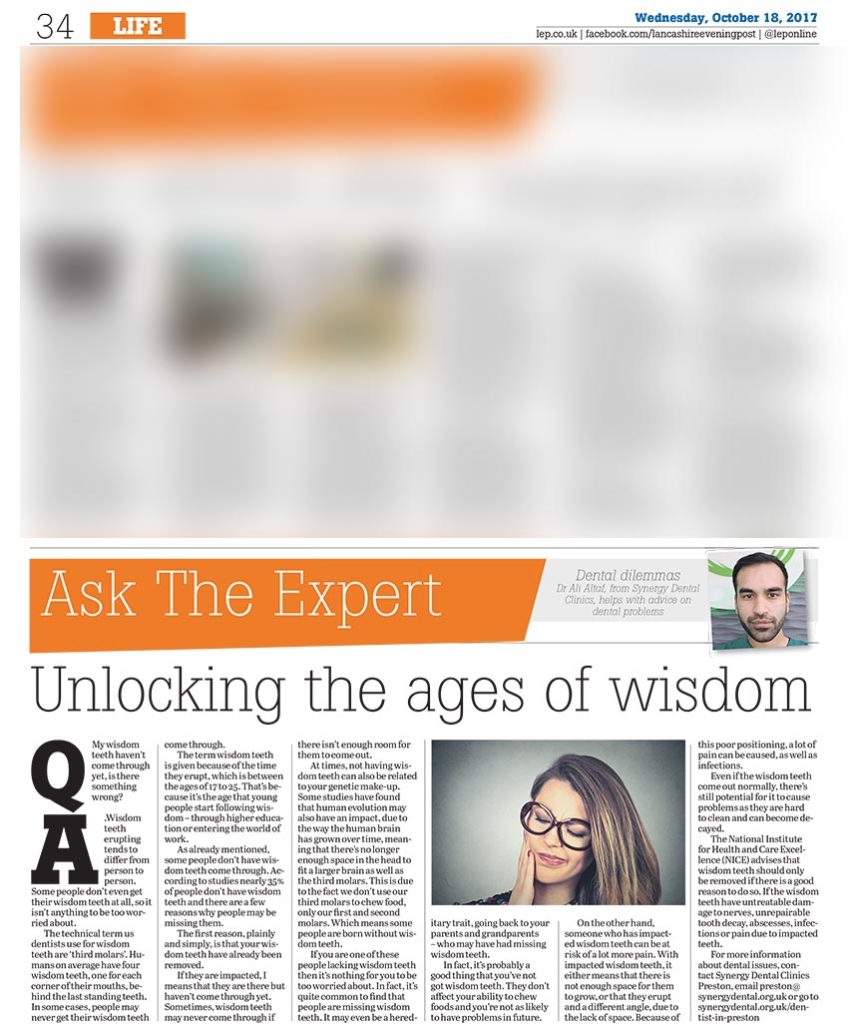 Q. My wisdom teeth haven’t come through yet, is there something wrong?

The term wisdom teeth are given because of the time they erupt, which is between the ages of 17 to 25. That’s because it’s the age that young people start the following wisdom–through higher education or entering the world of work. As already mentioned, some people don’t have wisdom teeth come through.

According to studies nearly 35% of people don’t have wisdom teeth and there are a few reasons why people may be missing them. The ﬁrst reason, plainly and simply, is that your wisdom teeth have already been removed. If they are impacted, it means that they are there but haven’t come through yet. Sometimes, wisdom teeth may never come through if there isn’t enough room for them to come out. At times, not having wisdom teeth canals be related to your genetic make-up.

Some studies have found that human evolution may also have an impact, due to the way the human brain has grown over time, meaning that there’s no longer enough space in the head to ﬁt a larger brain as well as the third molars. This is due to the fact we don’t use our third molars to chew food, only our ﬁrst and second molars. Which means some people are born without wisdom teeth. If you are one of these people lacking wisdom teeth then it’s nothing for you to be too worried about.

In fact, it’s quite common to ﬁnd that people are missing wisdom teeth. It may even be adhered it a trait, going back to your parents and grandparents – who may have had missing wisdom teeth. In fact, it’s probably a good thing that you’ve not got wisdom teeth. They don’t aﬀect your ability to chew foods and you’re not as likely to have problems in the future.
On the other hand, someone who has impacted wisdom teeth can be at risk of a lot more pain. With impacted wisdom teeth, it either means that there is not enough space for them to grow, or that they erupt and a diﬀerent angle, due to the lack of space. Because of this
poor positioning, a lot of pain can be caused, as well as infections.

Even if the wisdom teeth come out normally, there’s still potential for it to cause problems as they are hard to clean and can become decayed. The National Institute for Health and Care Excellence (NICE)advises that wisdom teeth should only be removed if there is a good reason to do so. If the wisdom teeth have untreatable damage to nerves, unrepairable tooth decay, abscesses, infections or pain due to impacted teeth.