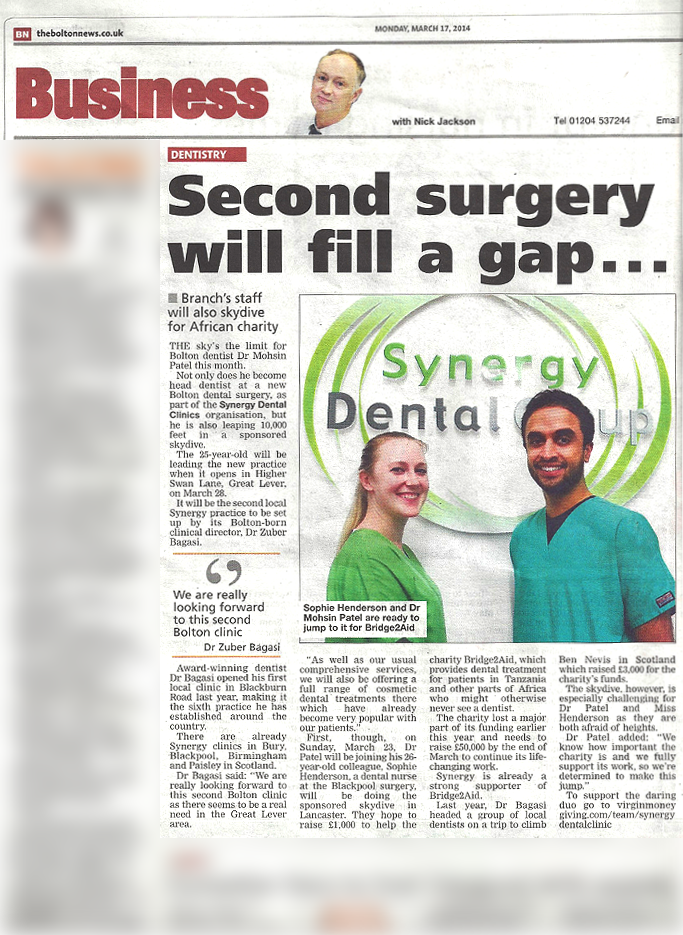 The sky’s the limit for Bolton dentist Dr Mosin Patel this month.

Not only does he become head dentist at a new Bolton dental surgery, as part of the Synergy Dental Clinics organisation, but he is also leaping 10,000 feet in a sponsored skydive.

The 25 year old will be leading the new practice when it opens in Higher Swan Lane, Great Lever, on march 28th.

It will be the second local Synergy practice to be set up by it’s Bolton-born clinical director, Dr Zuber Bagasi.

Award-winning dentist Dr Bagasi opened his first local clinic in Blackburn Road last year making it the sixth practice he has established around the country.

There are already Synergy clinics in Bury, Blackpool, Birmingham and Paisley in Scotland.

Dr Bagasi said: “We are really looking forward to this second Bolton clinic as there seems to to be a real need in the Great Lever area. As well as our usual comprehensive services, we will also be offering a full range of cosmetic dental treatments there which have already become very popular with our patients.”

First, though, on Sunday March 23rd, Dr Patel will be joining his 26 year old colleague Sophie Henderson, a dental nurse at the Blackpool surgery, will be doing the sponsored skydive in lancaster. They hope to raise £1000 to help the charity Bridge2Aid, which provides dental treatment for patients in Tanzania and other parts of Africa who might otherwise never see a dentist.

The Charity lost a major part of it’s funding earlier this year and needs to raise £50,000 by the end of March to continue its life-changing work.

Synergy is already a strong supporter of Bridge2Aid.

Last year. Dr Bagasi headed a group of local dentists on a trip to climb Ben Nevis in Scotland which raised £3000 for the charity’s funds.

The skydive however, is especially challenging for Dr Patel and Miss Henderson as they are both afraid of heights.

Dr Patel added: “We know how important the charity is and we fully support it’s work, so we’re determined to make this jump.”

To support the daring duo go to virginmoneygiving.com/team/synergydentalclinic