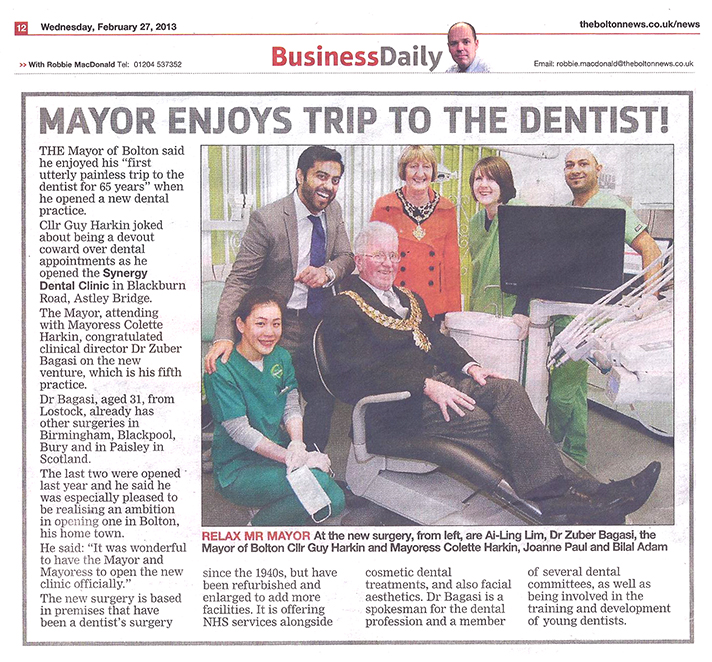 The Mayor of Bolton said he enjoyed his “first utterly painiess trip to the dentist for 65 years” when he opened a new dental practice.

Cllr Guy Harkin joked about being a devout coward over dental appointments as he opened the Synergy Dental Clinic in Blackburn Road, Astley Bridge.

The Mayor, attending with Mayoress Colette Harkin, congratulated clinical director Dr Zuber Bagasi on the new venture, which is his fifth practice.

Dr Bagasi, aged 31, from Lostock, already has other surgeries in Birmingham, Blackpool, Bury and in Paisley in
Scotland.

The last two were opened last year and he said he was especially pleased to be realising an ambition in opening one in Bolton, his home town.

He said: “It was wonderful to have the Mayor and Mayoress to open the new clinic officially.”

The new surgery is based in premises that have been a dentist’s surgery since the 1940s, but have been refurbished and enlarged to add more facilities. It is offering NHS services alongside cosmetic dental treatments, and also facial aesthetics. Dr Bagasi is a spokesman for the dental profession and a member of several dental committees, as well as being involved in the training and development of young dentists.