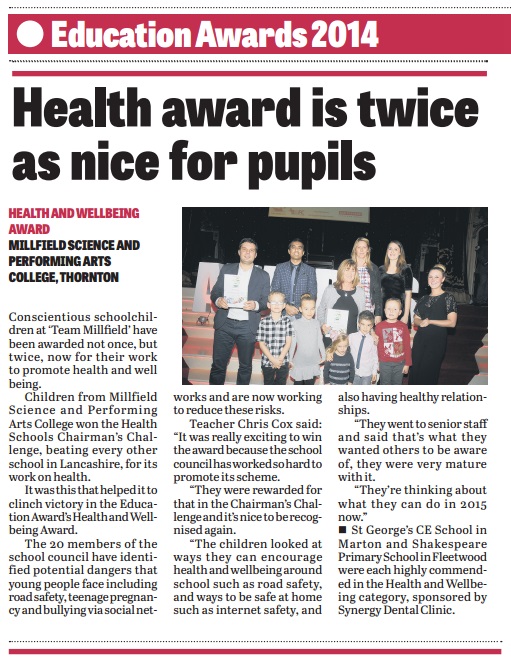 Conscientious schoolchil­dren at ‘Team Millfield’ have been awarded not once, but twice, now for their work to promote health and well being.

Children from Millfield Science and Performing Arts College won the Health Schools Chairman’s Chal­lenge, beating every other school in Lancashire, for its work on health.

It was this that helped it to clinch victory in the Educa­tion Award’s Health and Well­being Award.

The 20 members of the school council have identi­fied potential dangers that young people face including road safety, teenage pregnan­cy and bullying via social networks and are now working to reduce these risks.

Teacher Chris Cox said: “‘lt was really exciting to win the award because the school council has worked so hard to promote its scheme. They were rewarded for that in the Chairman’s Chal­lenge and it’s nice to be recog­nised again. The children looked at ways they can encourage health and wellbeing around school such as road safety, and ways to be safe at home such as internet safety, and also having healthy relation­ships. They went to senior staff and said that’s what they wanted others to be aware of, they were very mature with it. They’re thinking about what they can do in 2015 now.”

St George’s CE School in Marton and Shakespeare Primary School in Fleetwood were each highly commend­ed in the Health and Well be­ing category, sponsored by Synergy Dental Clinic.