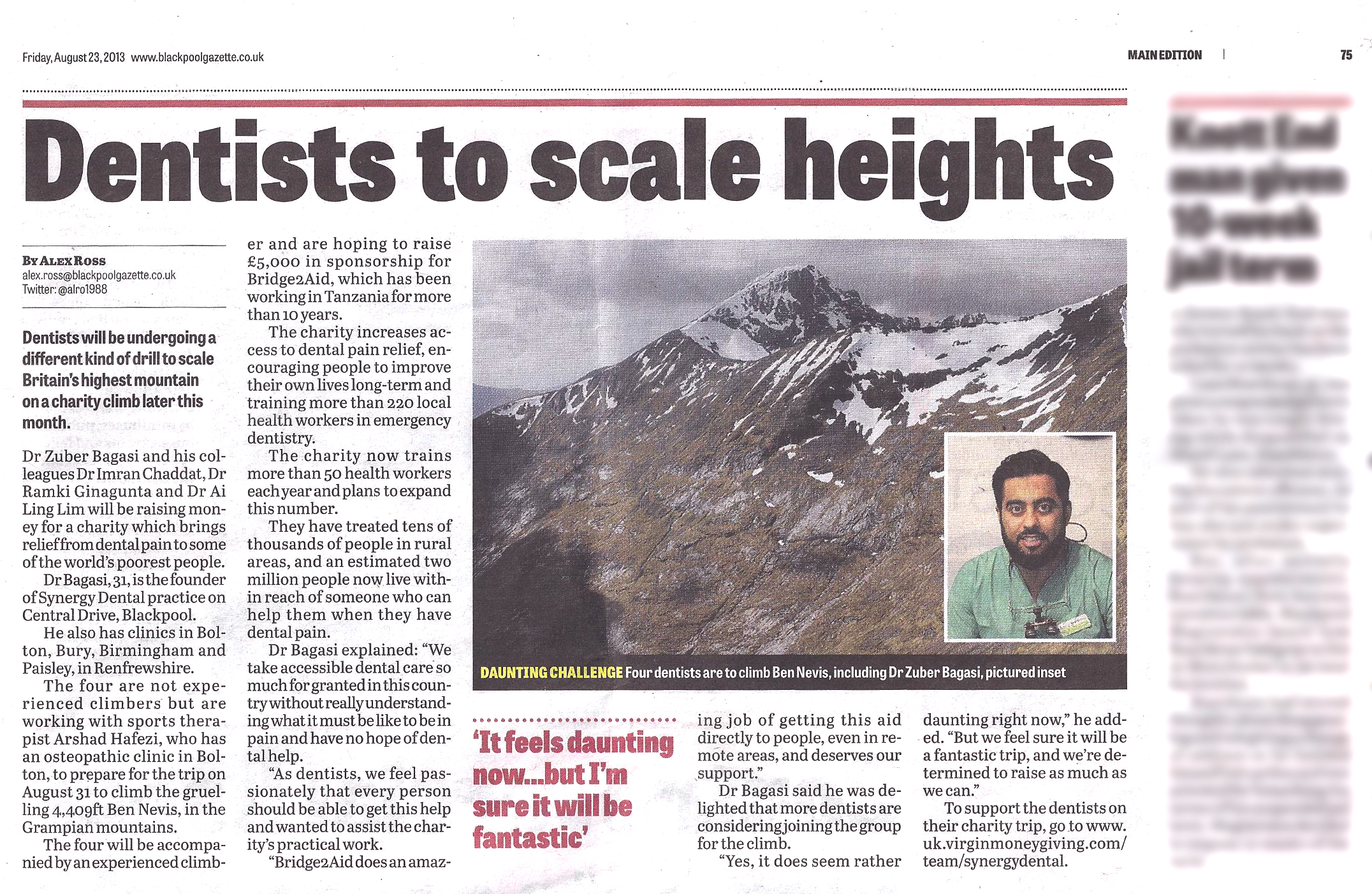 Dentists will be undergoing a different kind of drill to scale Britain’s highest mountain on a charity climb later this
month.

Dr Zuber Bagasi and his col­leagues Dr Imran Chaddat, Dr Ramki Ginagunta and Dr Ai Ling Lim will be raising mon­ey for a charity which brings relief from dental pain to some of the world’s poorest people.

Dr Bagasi, 31, is the founder of Synergy Dental practice on Central Drive, Blackpool.

He also has clinics in Bol­ton, Bury, Birmingham and Paisley, in Renfrewshire.

The four are not expe­rienced climbers, but are working with sports thera­pist Arshad Hafezi, who has an osteopathic clinic in Bol­ton, to prepare for the trip on August 31 to climb the gruel­ling 4,409ft Ben Nevis, in the Grampian mountains.

The four will be accompa­nied by an experienced climber and are hoping to raise £5,000 in sponsorship for Bridge2Aid, which has been working in Tanzania for more than 10 years.

The charity increases ac­cess to dental pain relief, en­couraging people to improve their own lives long-term and training more than 220 local health workers in emergency dentistry.

The charity now trains more than 50 health workers eachyearandplans to expand this number.

They have treated tens of thousands of people in rural areas, and an estimated two million people now live with­in reach of someone who can help them when they have dental pain.

Dr Bagasi explained: “We take accessible dental care so much for granted in this coun­try without really understand­ing what it must be like to be in pain and have no hope of den­tal help. As dentists, we feel passionately that every person should be able to get this help and wanted to assist the char­ity’s practical work. Bridge2Aid does an amazing job of getting this aid directly to people, even in re­mote areas, and deserves our ,support.”

Dr Bagasi said he was de­lighted that more dentists are considering joining the group for the climb.

“Yes, it does seem rather daunting right now,” he add­ed. “But we feel sure it will be a fantastic trip, and we’re determined to raise as much as we can.”

To support the dentists on their charity trip, go to www. uk.virginmoneygiving.com/team/synergydental.