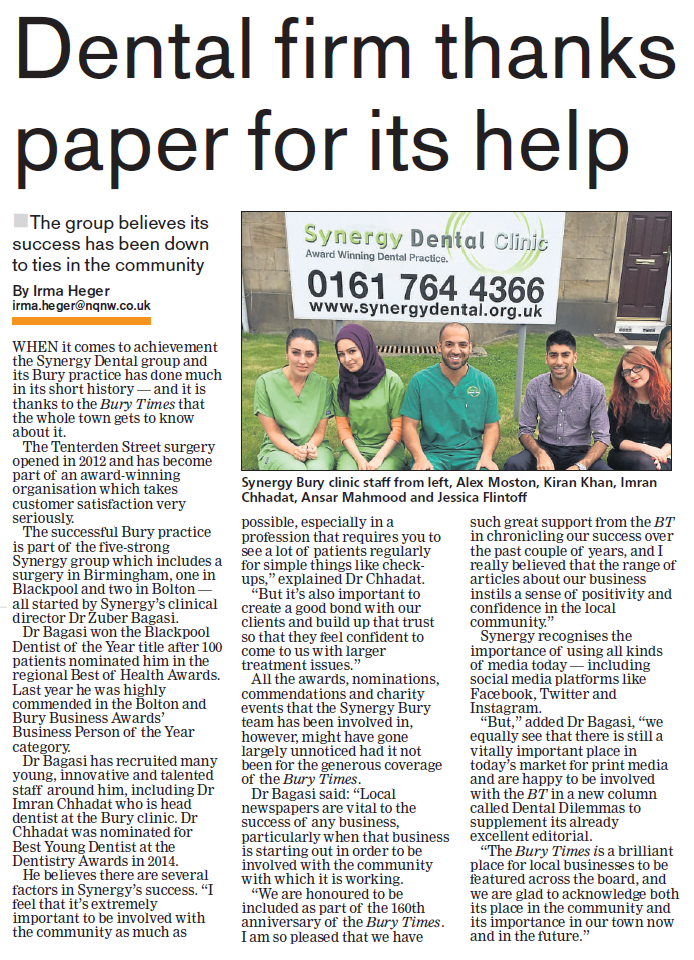 The group believes its success has been down to ties in the community.

When it comes to achievement the Synergy Dental group and its Bury practice has done much in its short history – and it is thanks to the Bury Times that the whole town gets to know about it.

The Tenterden Street surgery opened in 2012 and has become part of an award-winning organisation which takes customer satisfaction very seriously.

The successful Bury practice is part of the five-strong Synergy group which includes a surgery in Birmingham, one in Blackpool and two in Bolton – all started by Synergy’s clinical director Dr Zuber Bagasi.

Dr Bagasi won the Blackpool Dentist of the Year title after 100 patients nominated him in the regional Best of Health Awards. Last year he was highly commended in the Bolton and Bury Business Awards’ Business Person of the Year category.

Dr Bagasi has recruited many young, innovative and talented staff around him, including Dr Imran Chhadat who is head dentist at the Bury clinic. Dr Chhadat was nominated for Best Young Dentist at the Dentistry Awards in 2014.

He believes there are several factors in Synergy’s success. “I feel that it’s extremely important to be involved with the community as much as possible, especially in a profession that requires you to see a lot of patients regularly
for simple things like check- ups,” explained Dr Chhadat.

“But it’s also important to create a good bond with our clients and build up that trust so that they feel confident to come to us with larger treatment issues.”

All the awards, nominations, commendations and charity events that the Synergy Bury team has been involved in, however; might have gone largely unnoticed had it not been for the generous coverage of the Bury Times.

Dr Bagasi said: “Local newspapers are vital to the success of any business, particularly when that business is starting out in order to be involved with the community with which it is working. We are honoured to be included as part of the 160th aimiversary of the Bury Times. I am so pleased that we have such great support from the BT in chronicling our success over the past couple of years, and I really believed that the range of articles about our business instills a sense of positivity and confidence in the local community.”

“But,” added Dr Bagasi, “we equaly see that there is still a vitally important place in today’s market for print media and are happy to be involved with the BT in a new column called Dental Dilemmas to supplement its already excellent editorial.
The Bury Times is a brilliant place for local businesses to be featured across the board, and we are glad to acknowledge both its place in the community and its importance in our town now and in the future.”