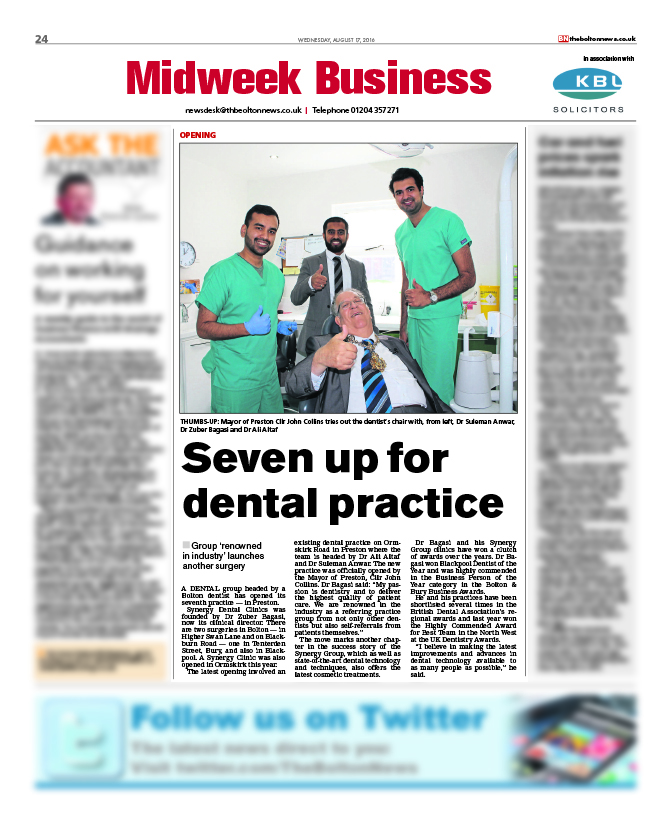 A dental group headed by a Bolton dentist has opened its seventh practice — in Preston.

Synergy Dental Clinics was founded by Dr Zuber Bagasi, now its clinical director. There are two surgeries in Bolton — in Higher Swan Lane and on Blackburn Road — one in Tenterden Street, Bury, and also in Blackpool. A Synergy Clinic was also opened in Ormskirk this year.

The latest opening involved an existing dental practice on Ormskirk Road in Preston where the team is headed by Dr Ali Altaf and Dr Suleman Anwar. The new practice was officially opened by the Mayor of Preston, Cllr John Collins. Dr Bagasi said: “My passion is dentistry and to deliver the highest quality of patient care. We are renowned in the industry as a referring practice group from not only other dentists but also self-referrals from patients themselves.”

The move marks another chapter in the success story of the Synergy Group, which as well as state-of-the-art dental technology and techniques, also offers the latest cosmetic treatments.

Dr Bagasi and his Synergy Group clinics have won a clutch of awards over the years. Dr Bagasi won Blackpool Dentist of the Year and was highly commended in the Business Person of the Year category in the Bolton & Bury Business Awards.

He and his practices have been shortlisted several times in the British Dental Association’s regional awards and last year won the Highly Commended Award for Best Team in the North West at the UK Dentistry Awards.

“I believe in making the latest improvements and advances in dental technology available to as many people as possible,” he said.